On July 20th 2021 a team from Full Scale Dynamics Ltd (FSD) carried out a modal test of the Bishop Rock Lighthousehelideck. The testing and subsequent modal analysis was part of University College London’s Future-proofing helidecks at sea: monitor, assessment and design project, funded via an EPSRC Impact Accelerator Account. 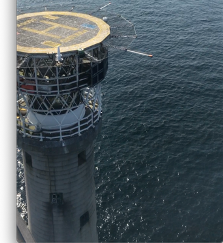 The helideck, constructed in 1976, was prefabricated in pieces from steel hollow sections and aluminium deck panels and installed in situ using bolts.

The lower steel sections are a vertical grillage with upright sections fixed to steel beams firmly bolted onto the masonry lantern gallery. A diagonal bracing grillage is next up, followed by a taller vertical grillage that supports the horizontal grillage of the helipad.

The load-bearing surface comprises aluminium panels fitted into the grillage with shear bolts designed to release panels under extreme vertical wave loads, a routine occurrence at least with Wolf Rock Lighthouse. Bishop Rock lies to the southwest of the Isles of Scilly, while Wolf Rock lies closer to mainland UK, southwest of Land’s End, and both lighthouses are now accessible only by helicopter.
A team from Exeter University’s Vibration Engineering Section carried out a modal test of Bishop Rock Lighthouse in 2016 using biaxial Honeywell QA 750 low noise accelerometers. Global modes of structure and helideck showed multiple likely modes in the 4-6 Hz range that did not fit the pattern identified on other lighthouses, possibly since Bishop Rock Lighthouse is effectively a newer (1887) structure encasing a shorter and weakened 1857 tower. 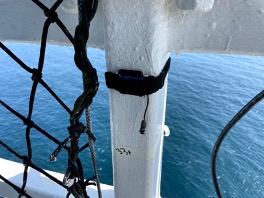 In the 2021 FSD modal only the helideck was measured, using APDM Opal wireless triaxial accelerometers roved around 29 test points: 24 on the vertical posts in three rings including at helipad level, plus 5 more points in the centre disk of the helipad.

Helideck response was generated by sea breeze, walking around the helipad and hitting a steel post with a mallet. 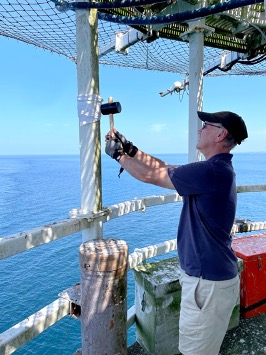 The quality of signals from the Opals was sufficient to identify seven modes up to 16Hz, including two around 4Hz corresponding to modes identified in 2016. The modes display combinations of sway, twisting about a vertical axis, and out-of-plane bending of the helipad in the form of a circumferentially supported dish.

The significance of the identified modes is that they reveal the nature of the steel helideck frame and inform the design of future helideck as the existing structures, now approaching 50 years of operation, may need eventually to be replaced.

Other than wave loading, significant dynamic forces are generated by helicopter operations.

Vibrations transmitted to the lighthouse structure are evident in a recording of the response of Wolf Rock Lighthouse due to one EC135 visit. While on station the rotor speed apparently drops to approximately 300 RPM, generating a response at 5Hz. 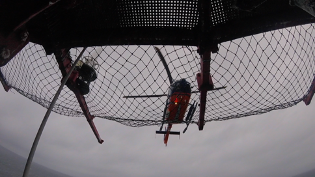 Back to News
This site uses cookies: Find out more.